According to the written and unwritten rules of journalism, press, and media, a journalist cannot write his or her own opinion in a report. Only the facts.

I reported on the inauguration of the 46th President of the United States, but there was a moment in the series of events that I did not write into my article. I did not consciously write about it because I knew that what I saw had to be written together with my opinion. Because what happened is what I think is instructive.

It so happened that one thing was left behind, and another thing happened on January 20, the day of the presidential inauguration. Which did not happen. A standard, I would say “familiar” moment in the series of inauguration ceremonies. To the best of my knowledge, it used to be the custom for the outgoing president and the First Lady to say goodbye over lunch or invite the new presidential couple to the White House for tea, as was the case with Obama’s presidential inauguration. The traditional lunch was previously held at the White House or, since 1953, at the Capitolium.

When Obama was inaugurated as president, the First Lady and President Obama invited the newly elected Trump and his wife to the White House for tea. The farewell president – in nonofficial circumstances – handed over the White House to the new President, before the inauguration ceremony.

The meeting of President Obama and Trump, although it was part of the protocol, it was not really a protocol meeting in terms of its purpose. Others did not attend the event, not for the press, not for the public, a kind of private meeting between four people. The situation was similar when President Bush left the White House. The farewell president and his wife left the White House after such events.

On the morning of the inauguration, President Trump and his wife were taken to the airport by helicopter, from where they immediately traveled to Florida. (I note, the purpose of the trip was not the Trump couple’s apartment in New York, but Trump’s favorite golf course. But there is nothing wrong with that.)

Trump and his wife refused to meet Joe Biden, the newly elected president. So, there was no meeting between the farewell and the new presidential couple. However, something happened that did not go on exactly according to tradition. 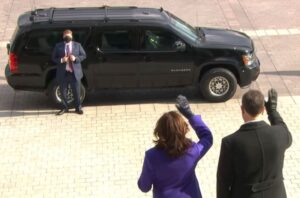 Farewell Vice President Mike Pence attended the inauguration ceremony, and when it was over, the new, now inaugurated Vice President, Kamala Harris, and her first “second gentlemen” in two accompanied the departing Pence couple to their car.

A lesson for Trump, gentlemanly, the correct behavior.