The eCCO Magazin published my interview with Nancy Prager-Kamel, the Chair of the Board of the Association of Foreign Correspondents USA / Scholarship and Education.

eCCO Magazine asked about the Scholarship program Nancy Prager-Kamel, the Chair of the Board of the Association of Foreign Correspondents USA / Scholarship and Education. 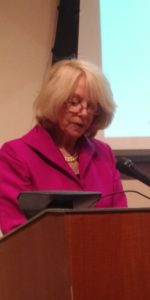 The AFC-USA announced a scholarship program for foreign journalists studying in the United States. Five foreign journalists selected among several competitive applications and they were distinguished based on strict criteria of their professional and academic excellence.

Nancy Prager-Kamel, the Chairwoman of Educational Programs and Scholarship answered the questions of eCCO Magazine.

eCCO Magazine: Why was important for the AFC USA to focus on the education of foreign journalists?

Nancy Prager-Kamel: Journalists have become an endangered species with safety, respect and support reaching a tipping point. Freedom of the press and its ability to hold the powerful accountable is more challenged than ever while news media as a whole suffers from loss of independence and growth in the public’s mistrust.

There is, throughout the world, more government censorship, more corporate control, increasingly more dissemination of misinformation, and more violence against journalists.

The moment we no longer have a free press, anything can happen. We – Association of Foreign Press Correspondents, US – are and how well we value and prepare the future generation of the journalist is our paramount concern!

Our mission is simply stated: through education, experience and mentoring we are dedicated to facilitate and accelerate support for a free and informed press with the goal of putting education in the epicenter of journalism.

eCCO Magazine: The university students who applied for this program from which countries come to study into the US?

eCCO Magazine: At which American universities studying these foreign journalists?

Nancy Prager-Kamel: The applicants came from close to two dozen major US universities/schools of journalism, have applied for our scholarship program, such as Indiana, Oklahoma, Columbia, Missouri, Stanford, Wisconsin, Northwestern, USC, Berkeley, NYU, CUNY. studying on the master level.

eCCO Magazine: Who were the decision-makers who decided who would receive this year’s scholarships?

Nancy Prager-Kamel: The applicants were selected based on the review of all applications by – experts in different media fields – the seven members of the Educational board of the AFC-USA who were: Anjali Sharma, who is a foreign press correspondent, and public relations consultant, Jane Isay is a writer, she has served on many nonprofit boards, including The New Press, Journalist and Women Symposium, etc., Marilyn Haft, is an entertainment and digital media attorney, Lena Tabori, is a publisher. She sits on a number of boards and blogs eg. The Huffington Post. Monique Tapie, is a communication, public relations expert, Thomas Barat, is a retired Professor of Communication, a foreign correspondent and the Editor in Chief of eCCO MAGAZINE, and myself. I am an investment banker ad a strategic advisor at the UN, countries and with the US Government on international issues and human rights. I served the most significant humanitarian boards both in the US and internationally.

eCCO Magazine: What aspects were considered in the evaluation?

Nancy Prager-Kamel: We took several criteria into consideration. The most important of which is the applicant’s past professional experience and materials. The other criteria were their response to the challenge of op/ed questions.

eCCO Magazine: For a scholarship program, it is important to have resources to pay for the scholarships. Where did AFC-USA have the money to do this?

Nancy Prager-Kamel: I would like to thank the supporters here too. The main supporters are multinational companies, Bayer, Microsoft, P&G, CBS NEWS and NASDAQ. A big thanks to our supporters for their substantial donations in support of the AFC-USA scholarship awards program an abling our educational panels an events.

eCCO Magazine: How do you evaluate this year’s applicants?

Nancy Prager-Kamel: It was a very competitive field with many outstanding submissions. Unfortunately, we could not offer all applicants a scholarship this year but encourage the foreign students to apply for consideration next year, as well.